Update: Server maintenance is complete, thanks for waiting!

We’re upgrading a few of our backend systems, and to do so we need to take down all of our Minecraft servers temporarily. The maintenance shouldn’t take much longer than 15 minutes and then we’ll be back up again. 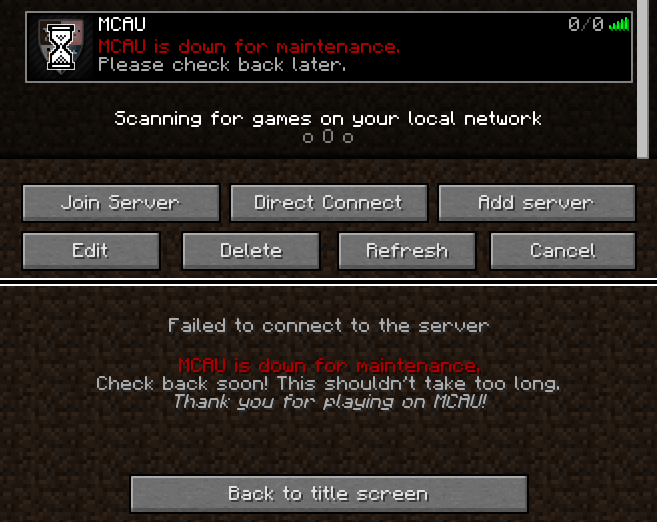 Servers will go down at:

Sorry for the inconvenience!

Is MCAU “Survival” too easy for you?
Do you miss the challenge of surviving, Singleplayer-style?
Looking for TRUE Survival?
-=: Well look no further, because MCAU’s Survival Challenge server is here! :=-
We have brought the spirit of Vanilla Minecraft gameplay to MCAU. We’ve taken away just about anything that Singleplayer doesn’t have, and in doing so we have opened the way for our players to rediscover the true challenge of Minecraft.

Survival Challenge is intended to be a cooperative game. Players who work together will find it easier to overcome the challenges and difficulties of this world. Building a sense of community will make Survival Challenge a much more fun place to be. There is limited PvP available (see below), but it is not the main focus of Challenge.

We’ve started referring to our standard Survival server as “Survival Lite”, since it is far from challenging. Those of you who enjoyed playing on our Tempmap, but hated the griefing that happened there – you will love this new server.

Sweet! How do I join?

The instructions below will not work until we find all the bugs and open approvals to everyone. Fifteen lucky people (randomly chosen) have got early access to test Survival Challenge.

Joining is as simple as typing the /challenge command:

Will Survival Challenge have PvP?

Not in the Overworld. But in the Nether, it’s free-for-all! Enter the Nether at your own risk. Bring a friend.

Will Survival Challenge be a Hardcore server?

Don’t confuse Hard Difficulty with Hardcore Mode – they are two different things. Dying in Survival Challenge won’t ban you like a Hardcore Mode server. However, dying DOES carry the very real risk of never seeing your precious items again. With no /back to return you to your death point, you’ll just have to walk and hope you get there in time.

What happens if I get banned?

Players who are banned from Survival Challenge will be returned to the Lobby and may continue to play on MCAU Survival Lite, however the ban will be recorded against them for staff to view. If you get banned, it is very unlikely you will get approved again.

Can you handle Minecraft… as it was meant to be?